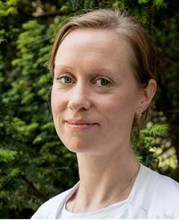 Pernille graduated as a medical doctor from University of Copenhagen Denmark in 2010. and finished as a specialized doctor in Rheumatology in April 2019.

Pernille started working at the Parker Institute in April 2019. Her research will focus on Fibromyalgia. Pernille is enrolled as a PhD student at the Department of Clinical Medicine at University of Copenhagen. The PhD project will focus on describing phenotypic characteristics of patients with Fibromyalgia referred to the Fibromyalgia unit at the Department of Rheumatology, Frederiksberg Hospital. Hopefully, the PhD project can identify predictors of long-term functional outcomes, including work disability, that could assist tailor the therapeutic decision for specific patients and potentially maximize benefits compared with offering generic intervention programs to patients with Fibromyalgia.